Wongari Eco Retreat is Pet-friendly because pets, mainly dogs, are so much a part of family life that going on holidays without them is almost as impossible as finding a destination that will accept them. At Wongari, we have no issues with well-behaved and loved pets being part of your shared holiday experience.

Of all the great features that Wongari offers, privacy, nature and comfort being amongst the more notable, it is Wongari’s open arms welcoming of all types of pets. But we do limit the number to just two (though we have even made exceptions).

But, sometimes, very rarely, a pet is with an owner that does not understand them - even if they are well-behaved and loved pets in their own way.

A recent stay by guests who brought their German Shepherd with them might illustrate this point.

The owners treated the German Shepherd like a poodle. And a small poodle at that. But, when you think about it, they’re very different animals. 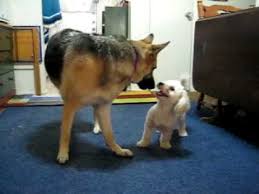 Poodles have wool, not long hair that falls out when you look at it. So it is never a problem with poodles hair. But if you were to have a German Shepherd, and not a poodle, than you would at least keep it outside or, at the very least, off the bed and couches. You would clean up the hair before you left. And you certainly wouldn’t be playing ‘ball’ indoors. Command words like ‘darling’ didn’t seem to cut any ice with the large dog.

One week later we had our 2nd German Shepherd ever on Wongari. Coincidences like this actually happen often. The contrast between the two couldn’t be sharper.

Zeeta, the 2nd German Shepherd, stayed outside for the most part. The dog readily obeyed commands like ‘sit’, ‘come’ and ‘stop’. And if it shed any hair you wouldn’t know as the cabin was left spotless.

While we obviously prefer the later, especially when it comes to the cleaning, we’re hoping the former remains the  exception it is.